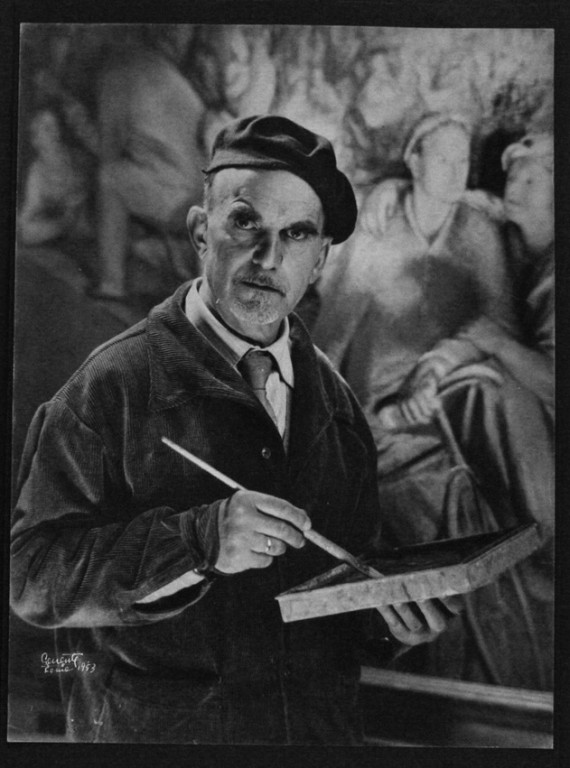 Ferruccio was born in via Buonarroti, the eldest son of the sculptor Stanislao (1860-1937) and Maria Ester Papi (1870-1945). In 1904 he attended the studio of Francesco Bergamini, a pupil of Michele Cammarano. In 1905 he enrolled in the courses of the Free Nude School, in via Ripetta, and in the evening courses of the French Academy. At the Academy he was able to meet important personalities such as Mario Sironi and Vincenzo Costantini, and to approach the study of the work of Luigi Serra and Nino Costa. 1907 coincided with the exhibition of the first work for the just sixteen year old artist. It is a self-portrait, later lost, presented at the LXXVII Exposition of Fine Arts in Rome. At the exhibition Capitolina also participated two years later with La calce, a painting that reveals the influence of Giovanni Segantini and divisionism on the adolescent Ferrazzi. It is likely that the Self-portrait with which he made his debut in 1910 at the Venice Biennale - a work in which the artist presents himself with the attitude and clothing of a prophet, and with a headdress that will act as a Leitmotif in the sequence of images of himself which he will be offering throughout his long artistic career - recalls quite closely the one that has been lost. In 1908 he had meanwhile won a four-year scholarship from the Catel Institute, which allowed him to devote himself completely to art. Ferrazzi was entrusted to the German Max Roeder, who introduced him to his compatriots on the Roman scene and tried to bring him closer to Idealism. Ferrazzi was beginning to attract the attention of the art world and right now demonstrated that he knew how to draw on more models, reworking them in a personal way. Participation in the First International Art Exhibition of the Roman Secession, with Genitrice, dates back to 1913. In December he won the national artistic retirement, thanks to which he managed to procure greater economic tranquility and to have his own studio in via Ripetta. Ferrazzi's art, hitherto closed to foreign influences, underwent decisive stimuli thanks to the first trip abroad, made the following year with his father. In fact, he went to Paris, attracted by the ancient paintings of the Louvre, and, not surprisingly, by the works of Georges Seurat, who among the French artists was the closest, in style, to the beloved Segantini. In confirmation of an education that took place in the wake of tradition, far from the avant-gardes, there is the fact that during the French experience he disdained Cubist and Fauvist painting, while he went to see the paintings of the Impressionists and became passionate about Cézanne. On his return, however, things took on different shades, especially following the Second Exhibition of Futurist painting, visited in March at the Sprovieri Gallery in Rome. At the end of the year he made the acquaintance of Ubaldo Oppi, and shortly afterwards of Cipriano Efisio Oppo, opposed to any innovation and then headed by the magazine Valori Plastici, which in the first post-war period will promote the needs of a return to order, after the countless experiments that had marked the beginning of the century. In this period he alternated works of a Futurist type, such as the first sketch of the Characters of the family, with others of Cézannian inspiration. It was at the Institute of Music between 1915 and 1916, when the first personal exhibition came, hosted at the LXXXV Exhibition of the Society of Amateurs and Connoisseurs of Fine Arts and summa of the various trends that operated in the artist. In fact, we have a Michelangelo's Pietà, flanked by a figurative production attracted by childhood landscapes and portraits (including that of Matilde Festa, who would become the wife of the famous architect Marcello Piacentini), but also a first hint of hallucinatory painting, as well as to futurist works to be ascribed mainly to the needs of a young author in the cultural climate of the moment. The prism also appears, that object full of meanings that will have an ever greater weight in Ferrazzi's career. Due to the first solo show, his place at the National Artistic Pensioner was revoked. In 1917 he exhibited at the Kunsthaus in Zurich. In 1919 he exhibited in the Great National Futurist Exhibition which was held in Milan. He then exhibited in Florence, Genoa and Moscow. In 1921 he participated in the first Rome Biennale and in 1923 in the Second Biennale. In 1926 he participated in the Exhibition of Modern Italian Art set up at the Gran Central Art Galleries in New York. Also in 1926 he received the Carnegie Award. In 1929 he became a teacher of pictorial decoration at the Academy of Fine Arts in Rome; Renato Guttuso is one of his pupils. In 1931 he exhibited at the First Quadrennial of National Art in Rome. In 1933, although he was not a member of the Fascist Party, he was appointed Academic of Italy. In the thirties he participated in the exhibition on the Italian twentieth century, set up in Buenos Aires. In 1941 he performed two great encaustics in the Sala del Galilei of the University of Padua. In 1943 he exhibited in a large solo show in the Rome Gallery. 1946 saw a new solo show in the San Marco Gallery. He subsequently participated in Quadrennial, Biennial and the latest edition of the Carnegie Prize. In 1951 he painted religious frescos in the basilica of Santa Rita da Cascia and in the Church of Sant’Eugenio in Rome. In 1954 he finished the great mosaic of the Apocalypse on the walls of the crypt of the Ottolenghi Mausoleum in Acqui Terme. In the fifties he also began his activity as a sculptor. In 1956 he painted the fresco entitled "Attesa" in Arcumeggia. 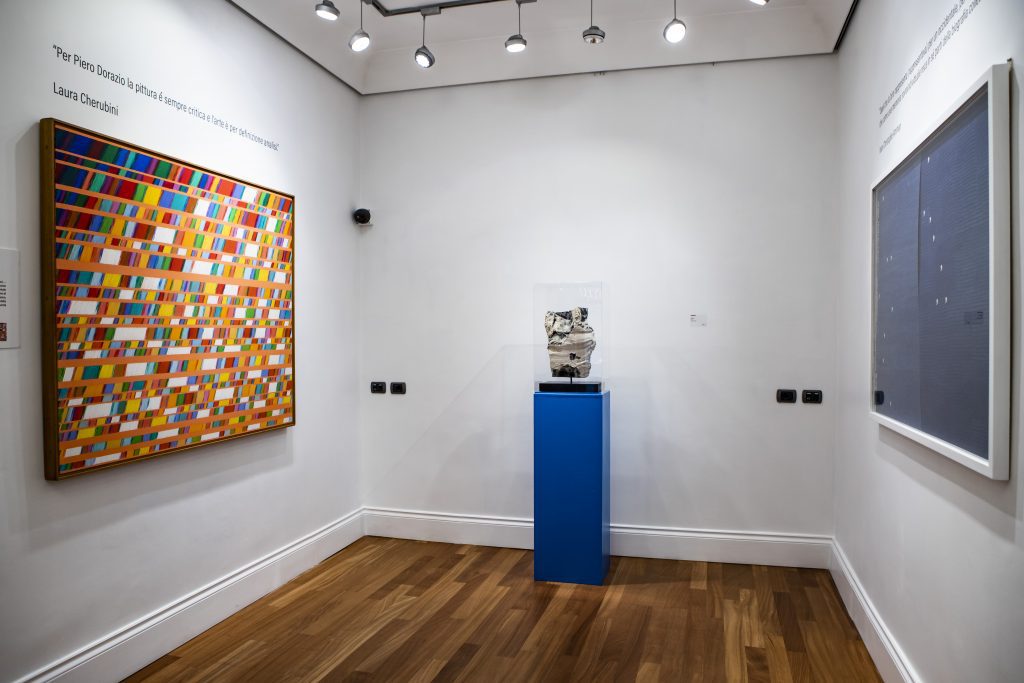 BEYOND. Protagonists of art in Italy from the 1950s onwards 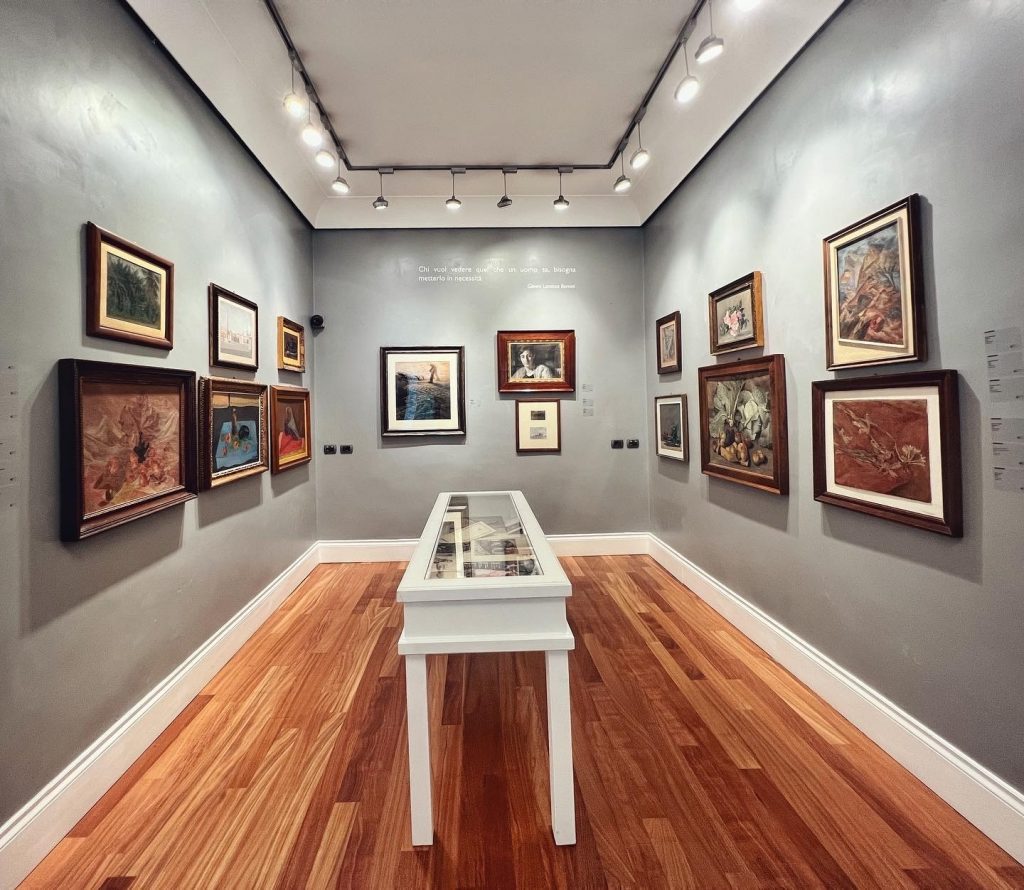