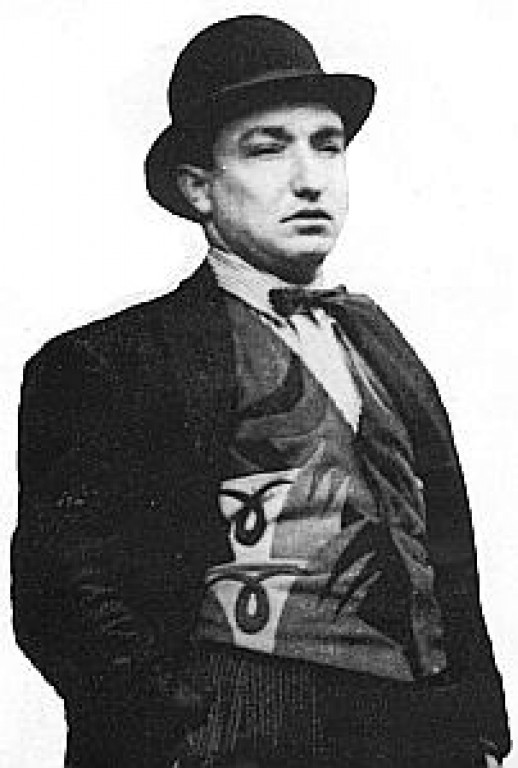 Fortunato Depero, an important representative of Futurism, was born in Fondo in Val di Non on March 30, 1892 and moved with his family to Rovereto, he attended the Elisabettina Royal School where he followed the course of applied arts. Rejected in the admission exam to the Vienna Academy of Fine Arts (1908), he began working for a marble worker. Dealing with gravestones, he finds himself particularly attracted to sculptural art. The budding artist moved to Rome in December 1913 where the artistic climate is decidedly Decadent but where they live the futurist avant-gardes; in contact with Sprovieri, Balla, Cangiullo and Marinetti, he participated in the International Futurist Free Exhibition. With the outbreak of the First World War while Italy was still neutral, in March 1915 he participated with Giacomo Balla in the publication of the "Futurist Reconstruction of the Universe ", manifesto that opens a new season of Futurism, proposing a fusion of the different arts and a greater involvement of art in life, associating it in particular with the themes of violence. Upon Italy's entry into the war, Depero enlists as a volunteer, but after a few months he is exonerated for health reasons and, returning to Rome, prepares an exhibition where he will exhibit more than two hundred works (oils, tempera, collages, constructions, plastics, etc. .) strongly influenced by Balla's style. In 1916 the Russian ballet impresario Sergey Diaghilev commissioned him to set designs and plastic costumes for two performances, one of which Le chant du rossignol by Igor Strawinskij, was not performed. In that period Depero met characters in sight including the dancer Massine, the poet Cocteau, pablo Picasso, Larionov and Gontcharova. He also met the decadent poet Gilbert Clavel and stayed with him in Capri in 1917, illustrating the story "An institute for suicides"; in the same year he also prepared theatrical performances and in 1918, in collaboration with Clavel, he performed in Rome the Plastic Balls, a show in which actors and dancers are replaced by wooden puppets with music by Casella, Malipiero, Bartok, Tyrwhitt. , Fortunato Depero participates in various exhibitions, including the one in Milan, where Martinetti tries to bring together and relaunch the post-war Futurists. In 1919 the "Depero Art House" opens in Rovereto, where objects of applied art, cloth inlays and collages are produced; in the same period he also created interior decorations and furnishings, such as the Cabaret del Diavolo for which he also created wall decorations. In 1924, during the tour of the New Futurist Theater, he staged the Anihccam Mechanical Ballet 3000 (the word machine in reverse), which will then be repeated in more than twenty Italian cities. In 1925 in Paris, together with Prampolini and Balla, he represented Italy at the International Exhibition of Decorative Arts (Art Decò) and two years later creates the bolted book "Depero-Dinamo Azari", the first example of a futurist book-object, in which the artist fully expresses his graphic imagination. Before leaving for New York, in September 1928, Depero had dedicated himself particular to advertising graphics, creating many posters, working especially for the Campari company for which he created more than one hundred sketches.In America, where he remained for almost two years, he committed himself to the world do of theatrical scenography and advertising and when he returns to Italy, he founds and directs the magazine "Dinamo Futurista" in Rovereto, publishes radio lyrics, participates in numerous national and international exhibitions and dedicates himself to the creation of furniture, objects and decorative panels with a new material born from the autarchy imposed by the Fascist regime to cope with the sanctions of 1928, the Buxus, a material for coverings used by interior designers and engineers of the time, which had no luck beyond the twenty years or beyond the borders of Italy. With the advent of Fascism Depero had approached this political current believing that Futurism could interact with politics, in fact his political passion also includes left-wing futurists. During the Second World War he retired to Serrada di Folgaria and accused of having been a fascist for having published, during the rise of Mussolini, the book "A passo romano", in 1948 he moved back to the United States, where he tried to advertise the new material he uses, the buxus.Depero finds New York changed, hostile to futurism because it is considered fascist art, so he decides to retire to a small town in Connecticut where he works until his return to Italy. Returning to Rovereto in 1956, he completed the decoration of the Provincial Council Hall of Trento and the following year, in collaboration with the Municipality of Rovereto, he created the Permanent Gallery and Depero Museum, an institution that today has more than 3000 paintings and drawings, approximately 7,500 manuscripts and a rich library on Futurism. The artist died in Rovereto on November 29, 1960, one year after having inaugurated the first Futurist museum in Italy. 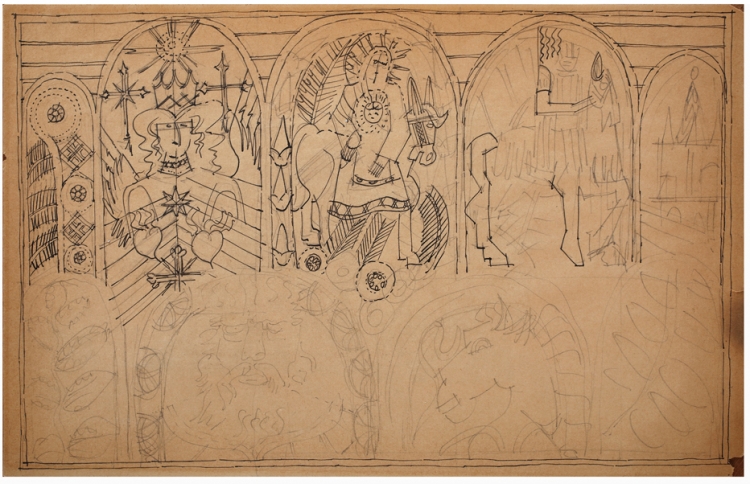 pencil and ink on paper