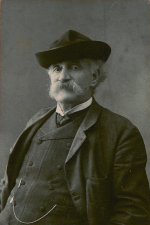 Giovanni Fattori, son of a craftsman, studied in Livorno with the modest painter Bandini, and in Florence (from 1846) with G. Bezzuoli; later, attending the Caffè Michelangelo, he joined the Macchiaioli, of which he became the most authoritative representative. He left Florence only for short trips: in addition to Paris, where he met Manet (1875), he was in London, Dresden, Philadelphia. He began with a historical painting with a fictional subject (still exemplified by a painting elaborated between 1858 and 1861 Maria Stuarda al campo di Crookstone, Florence, Mod. Art Gallery); but soon he began to portray scenes of military life from life, and with Il campo italiano after the battle of Magenta (1861, Florence, Gall. d'Arte Mod.) he arrived at a happily naturalistic painting, which he would later develop in the sense of a more and more sobriety and solidity. The large picture represented the manifesto of Risorgimento history painting, which Fattori was able, among the few, to still practice with adherence to reality and without any concession to celebratory rhetoric (The assault on the Madonna della Scoperta, 1868, Livorno, Mus. Fattoriano; Cavalry charge, 1873, and The square of Vilafranca, 1876-78, both in Florence, Mod. Art Gallery; The Custoza Square, 1876-80, Rome, Mod. Naz. Art Gallery). Subsequently the artist gradually abandoned the romantic chiaroscuro for a contrast of light-color spots of great clarity; and he came more and more to construct his own paintings by chromatic zones of an almost abstract weight: Palmieri's Rotunda (1866, Florence, Mod. Art Gallery), Lady in the sun (1866, Milan, Coll. Jucker). Sometimes he also exploited the qualities of the support (board or cardboard) to create suggestive effects, letting the veins or grain show through: La Sardigna a Livorno (1865-67, Florence, private collection), Le botti rossa (1868-70, Milan, Jucker collection), Marina plumbea (1870-75, Genoa, priv. Collection), La Torre del Marzocco (1885-90, Livorno Mus. Fattoriano). He also made numerous portraits, of great plastic evidence: The niece (1856-57), La cousina Argia (1861, Florence, Art Gallery Mod.), Diego Martelli in Castiglioncello (1866-70, Milan, Coll. Jucker) , The stepdaughter (1889, Florence Gall. D'Arte Mod.), La scolarina (1893, Florence, Coll. Ojeti) and The third wife (1905, Livorno, Mus. Fattoriano). Recurring and constant themes throughout Fattori's work are landscapes, the people of Maremma (I butteri, 1893, Livorno, Mus. Fattoriano) and military life (seen, often, with raw and bitter realism: Lo staffato, 1882 , Florence, Mod. Art Gallery). The adhesion to realism unifies all the phases of him: the same Fattori affirmed that art must draw inspiration from the manifestations of nature and from social commitment. Fattori should also be remembered as a watercolorist (La diligence, ca 1880) and etching artist: the scratched skies, the black-white contrasts, the formal simplification make his engravings true jewels of style (Adua, 1896; Company of soldiers). 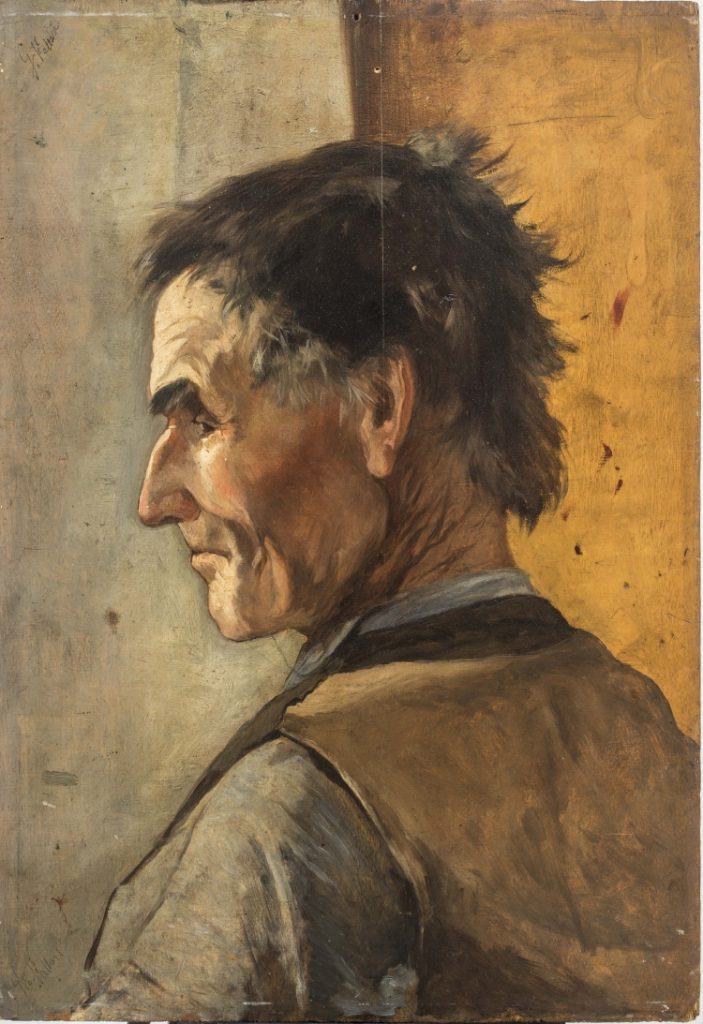 oil on the table