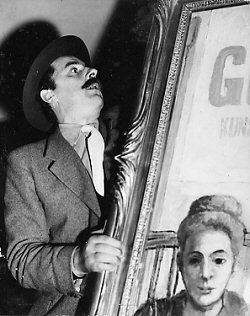 He was born in 1909 in Faenza. Already an apprentice in a ceramics factory, he trained at the Academy of Fine Arts in Bologna and began to paint figures, portraits of friends, landscapes of the countryside and the Faenza suburbs. In 1929 he moved to Rome, where he met Scipione and Mafai and began his very rich exhibition activity by participating in the 1st Regional Exhibition of the Emiliano-Romagnolo Fascist Syndicate of Artists; the following year he exhibits a work at the 17th Venice Biennale and travels to Paris to study the Impressionists. In 1932 he settled permanently in Rome where he frequented the Terza Saletta del Caffè Aragno and became friends with Renato Barilli, Vincenzo Cardarelli, Emilio Cecchi, Giuseppe Ungaretti and the young Leonardo Sinisgalli, Luigi Diemoz, Enrico Falqui and Corrado Cagli. In 1933 he made his first solo show at the Galleria di Roma. Alongside his pictorial activity, he works as a draftsman for the magazines Quadrivio, L’Italia Letteraria, Primato, Document, Radiovoci, Civiltà delle Macchine and as an illustrator of literary works. He also creates mosaics and wall decorations (1940, decoration of the Palazzo dei Ricevimenti and Congressi E42) and costumes and sets for the theater (1950, Anfiparnaso by Orazio Vecchi, Teatro Eliseo, Rome; 1964, scenography for La Bugiarda by Diego Fabbri, Teatro Quirino, Rome; 1963, The Country Philosopher by Carlo Goldoni, Teatro della Cometa, Rome) In addition to the numerous personal and group exhibitions, he participates assiduously in the most important national and international exhibitions: Rome Quadrennial (1935, 1939, 1943, 1948, 1955, 1959), Venice Biennale (1936, 1938, 1942, 1948, 1950, 1966, 1968, 1972), Biennial of Italian engraving (1955, 1965), Biennial of Painting of Menton (1968). In 1939 he held the chair of Ornato Drawn at the Royal Liceo Artistico in Florence. In 1955 he won the chair of painting at the Academy of Fine Arts in Rome, where he will teach until 1977. In 1959, following the personal exhibition at the John Heller Gallery in New York, he was commissioned by the Fortune magazine in Chicago to create a series of canvases on the New York Bridges to illustrate the February 1960 issue of the magazine; the works are then exhibited in a traveling exhibition in the United States. In 1965 it was the first anthology of paintings set up at the Rome Awards Institute (Palazzo Barberini) and presented by Raffaele Carrieri, Virgilio Guzzi and Giovanni Sangiorgi. In 1967 he participated in the exhibition Modern Art in Italy 1915-1967 curated by Carlo Ludovico Ragghianti (Florence, Palazzo Strozzi); the following year he was awarded the Presidency of the Republic Award by the Academy of San Luca in Rome, followed by an anthology presented by Virgilio Guzzi. In 1969 he was elected Academician of San Luca; in 1976 he was awarded the Gold Medal of Public Education for artistic merits. In 1981 he was destined to be elected President of the National Academy of San Luca, but he declined the post for health reasons. He died in Rome on April 5 of the same year. In his painting he combines metaphysical suggestions, surreal influences and an ironic primitivism derived from Klee. He composes ambiguous polyp-perspectives where, in a dimension of subtle disorientation, cathedrals, suburbs, still lifes, female portraits appear.